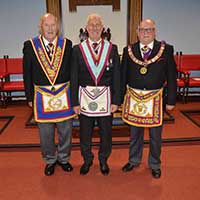 The Duncan’s Ritual Team delivered a portion of the Duncan Ritual in a faultless manner, this was followed by an Oration delivered by W. Bro. Rev. Raymond Bayley which was well received by all present.

The Deputy Grand Master then invited the Deputy Grand DC to bring forward W. Bro. Robert Barry Jones, PPGJO who was then appointed to the Rank of PAGDC, much to Barry’s surprise and to the delight of all present.

Much credit for the success of the event goes to W. Bro. John Phillips, PAGDC, the secretary of the Lodge who had worked so hard to prepare for the event, he had also produced a wonderful Centenary Booklet.