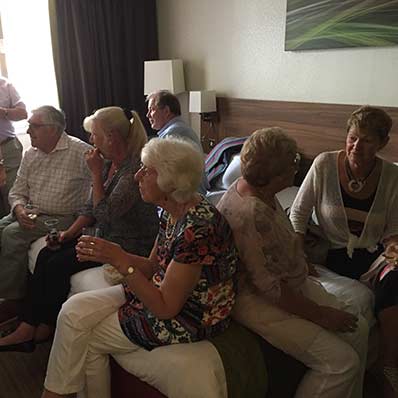 The Province of North Wales was well represented with 22 Brethren and their partners having traveled to Lincoln to celebrate the occasion, where it was announced that £853,000 had been raised, of which £11,853 was from North Wales.

On the Friday night we all dined together at a Cantonese Restaurant were the food was magnificent and a brilliant night was had by all. The following day, some went to the Lincolnshire Aviation Centre where the main attraction is the restoration of a World War 2 Avro Lancaster, NX611 ‘Just Jane’, later that day we made a visit to the International Bomber Command Centre. The IBBC serves as a point of recognition, remembrance and reconciliation for those who served, supported or suffered during the bombing campaigns during the Second World War. Some of the party preferred to ‘do their own thing’ on the Saturday, Lincoln is a beautiful City.

On the Saturday night we all travelled to the Epic Centre on the outskirts of Lincoln to attend the main Banquet, over 900 dined and the Festival result of £853,000 was announced.

This years Festival was rather special as it commemorated 150 years since Rev. George Raymond Portal founded the MBF. Rev. Portal strongly believed that it was vital that the Mark Degree have ownership of a Benevolent Fund.

Learn more about the Mark Benevolent Fund and the 150th Festival