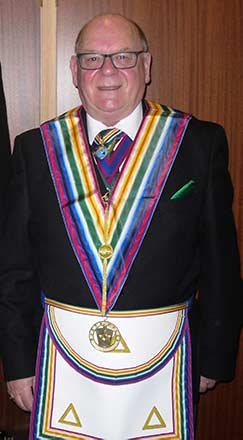 “Brethren I welcome you all to this Provincial Royal Ark Mariner Assembly, another fantastic attendance Brethren, I thank you for your support and for the loyalty you have shown to the Province and those Brethren who are to receive Provincial RAM Rank.

We all set ourselves goals, one of mine was to resurrect this RAM Assembly, we re-introduced it in 2014 and it has been a success ever since. Most of the Mark Provinces now have a RAM Assembly and they tend to be most successful.

Let me firstly direct your attention to the meeting of Grand Assembly last December, three Brethren of this Province received RAMGR on that day, W. Bro. John Evans, our Provincial DC, W. Bro. Phil Edwards our Deputy Provincial DC and W. Bro. Richard G. Jones of Idris RAM. All of the recipients fully deserve the rewards of their labours and I congratulate them all once again. Brethren I remind you all that there is no automatic entitlement to either Grand Rank or Provincial Grand Rank either in Mark or RAM and it intrigues me when I hear that Brethren are making certain assumptions on the back of previous appointments for instance, I am more interested in the now and the future Brethren, rather than the past.

I must at this point mention Mark Grand Ranks, this year there will be two Investiture Meetings, the one on June 12th is for Active Appointments and First Appointments, those Brethren receiving a Promotion will be Invested at the September Meeting of Mark Grand Lodge, that is on 11th September, 2018. We are trialling this and we will see how we get on with it as to whether this will be the norm in future.

Brethren, in the past we have had overspill rooms at our June meeting, these rooms are costing £25000 to have the proceedings relayed into them, there will be no overspill rooms this year and attendance will be limited to 1700. Any Brother wishing to attend, whether they are dining at the Connaght Rooms of not, must notify MMH of their attendance by completing one of the registration forms which will be available on the Mark Grand Lodge Website shortly. By the way Brethren, I was in London on Thursday and I can confirm that our clothing shop, which has had a closing down sale for as long as I have been attending Mark Grand Lodge has finally closed its doors, W. Bro Eric Owen will be particularly gutted. I must be looking like a local down in London as I was asked for directions on Thursday and I was able to tell the fellow how I get to the British Museum, if am not careful I will start talking like Kelvin Sharpe or Phil Orton and driving around a yellow three wheeler.

I had hoped to be able to mention the names of those Brethren who are to be Appointed or Promoted so that you can make arrangements to get to London but the recipients will not be receiving their letters until either today or on Monday.

I had the pleasure today to invest Brethren with Prov. RAMGR, all 8 recipients were in attendance, all of the recipients are worthy of the Promotion, I thank them for their work and look forward to them increasing their efforts for this wonderful Royal Ark Mariner Degree.

I can only promote 8 Brethren to ProvRAMGR each year and from the Ranks of our ProvRAMGR Holders I can put forward the names of three Brethren a year to receive Grand Rank. It does not take a Mathematician to work out why it is so difficult to get RAMGR, the figures speak for themselves. In a period of five years 40 Brethren may get ProvRAMGR but of those only 15 will get RAMGR in five years.

I need to mention something of what has been happening in the Province during the past year and what will be happening in the near future. The numbers are holding up reasonably well, our RAM membership remains at 380 as at August 2017, the same as 2016. I should mention the work of W. Bro. John Phillips in attracting members to our Installed Commanders Lodge, if you have not joined Cambrian Installed and you are an Installed Commander then please consider joining, I am sure that John has some forms with him. We need to keep membership figures accurate, I would ask Brother Scribes that you inform the Provincial Scribe as soon as you hear of a change in membership, don’t keep it until near the year end, I don’t particularly like surprises. Keep an eye out for Candidates and please look after those members you have got, if they are not attending then find out why and try to do something about it. Make sure that your Almoner is active, get a report from him at every meeting, I will be having a look at your minutes and hope to see every Lodge receiving a report from their Almoner. We are continuing to carry out Provincial Team visits and they are extremely successful, we went to Amlwch to see W. Bro. Andy Chape Installed into the chair of St Eilian RAM in September, in October the team visited Welchpool and last month a Banner was Dedicated by my Deputy at Y Geninen, all marvellous occasions. In a week moment I decided that I wished to be Installed into the chair of Maen Clo RAM and I will do so in April, don’t know why I decided to do that, maybe my Medical report will give me a clue!!!

Last year, in February, we had a Secretary/Scribes Forum, we have not held a Forum so far this year, I will be inviting the new Provincial Secretary to look into organising one after his appointment in June. That leads me on nicely to thank certain members of the Provincial Team who will be retiring from Office in June, I thank them all for their service to the Province, W. Bro. Graham Bradshaw, for his reliability and professionalism as our Provincial Scribe, W. Bro. Phil Orton for his enthusiasm and support as our Provincial Almoner and W. Bro John Evans, who moves from DC to the dizzy heights of Deputy PGM, taking over from W. Bro. Dave Wright. You will observe that I do not say ‘stepping into the shoes of Dave Wright’, as big as John is even he would have difficulty in filling Dave’s shoes. I thank you all and I wish the new incumbents every success, I am sure that they will have all the help they need from their predecessors if they ask. Special message to you Colin Lemin in filling the office of Provincial Scribe, I am sure that you will be a successful Provincial Secretary, you have already indicated that you wish to attend the Provincial Meetings of Dyfed, Cumberland and Westmoreland and Durham, all of which take place in June just after our own Provincial Grand Lodge, I thank you for your support.

Our Charity night last September was the best ever with over 150 attenders and £3500 raised for Charity, a fitting tribute to the late W, Bro. Eddie Urwin. This year a similar event will take place on 29th September, organised by W. Bro Paul Sefton, please give him your support.

On Sunday, May 13th I and my wife Susan will be attending a function at Flint Masonic Hall, an afternoon tea, numbers are limited, there will be a raffle for worthy causes. If you want to come along then give your names to W. Bro Paul Sefton it promises to be a relaxed afternoon, I hope it is anyway, can’t see Disco music being appropriate on a Sunday so let’s just get together and have a quiet social event. Next December, on 18th actually we will introduce an evening of Carols and readings, the first such meeting will be at Bangor Masonic Hall, if it is successful then we will move the Service to another venue the following year.

There was another Fund raising event last year, a Sponsored Walk to coincide with one taking place in London on 6th May, 2017. Ours  took place in Barmouth and was a complete success raising over £7000, to those of you who completed the walk with Dave and I, my thanks, I hope that your blisters have cleared up. For those of you did not make the walk but did sponsor us I thank you and I have got your names for next time !!!

It has just been announced that the MBF will be supporting St Johns Ambulance by donating just over £3million to them over two years from 2018 to enable them to replace up to 52 of their ambulances and support vehicles, so if you want to know what happens to your donations well there you go. I will be going to Cardiff on 18th April for a Celebration of the Centenary of St. John Priory and I will also attend in Cardiff on 23rd June when the four PGM’s based in Wales will formally hand over four Ambulances for use in our Provinces.

I will also be attending at the National Motorbike Museum in Birmingham on August 17th when 22 Blood Bikes will be presented to the Blood Bike Association.

I said last year that I would not be imposing additional costs on you by inviting Brethren from other Provinces to our RAM Assembly, there are no guests here today. I do however wish to comment on the support I have received from my two Past PGM’s, Both John and Gareth are so important to this Province with their wise counsel and advice, I am most grateful to them both, John cannot be with us today but R.W.Bro. Gareth Williams is with us and both he and his wife Margaret will be with Susan and I at the Lincoln Festival. Brethren it looks like we will have some 20 attenders at the Festival in Lincoln in July, brilliant, double the number that attended last year.

Since our last Assembly the Order has suffered the loss of many Brethren, you will all have particular memories of our friends who have passed to higher service, they will be mentioned individually at our Mark Provincial AGM and they are continually in our thoughts

In conclusion, may I thank our DC Section for their work, the Provincial Scribe and his Deputy for their diligence in looking after the Administration, the Brethren of Hawarden who have arranged the setting up of the Lodge and the Festive Board.

W. Bro. John Phillips, Scribe of Cambrian Installed Commanders, thank you and the Brethren of Cambrian Lodge for hosting this Assembly once again.

Most of all Brethren I thank you all for your attendance, I do hope that you enjoy the remainder of the day.

The Provincial Grand Assembly will take place again next year on the first Saturday in April, at a venue to be decided, until that time may the Supreme Commander of the Universe bless you all and keep you in his care.”