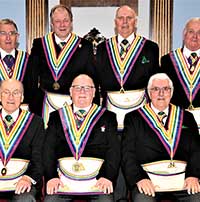 Over 110 Brethren attended the Annual RAM Assembly which was held at Bangor Masonic Hall on Saturday 6th April, 2019, with over 100 dining.

A fantastic day when the recipients of ProvRAMGR were invested.

At the Festive Board the Raffle of a ‘Chest containing a few bottles’ was conducted which raised £530 which is to be donated to the sponsored walk which will take place on Sunday 19th May, the Chest was hand made by W. Bro. Stewart Cole, RAMGR

Next Year’s Assembly will be held on Saturday 4th April at a venue to be decided later.