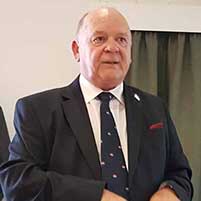 The 2019 Grand Officers Luncheon was held at Elwy Hall in Rhyl on Tuesday the 13th of August.

The Provincial Grand Master welcomed all those present, especially the newest Grand Officers and the current Provincial Wardens. Apologies had been received from several Brethren and these were duly recorded.

The PGM then went on to address the Brethren, a summary of which follows:

The current situation regarding Grand Lodge Appointments and Promotions will remain with first appointments being conferred in June and promotions in September.

The Provincial Meeting last June was a great success with the attendance of the Assistant Grand Master, R.W.Bro. Steven Davison being in attendance, next year’s meeting will revert to the third Saturday in June, 20th June, 2020 and it is expected that the third Saturday will once again be the regular date for our meeting.

The Provincial Website, which has now been in operation for a year, was proving to be a success and W. Bro. Faris Raouf was congratulated on his work in the design and the upkeep of the Website. More content for the Website was required, however, and the PGM urged all Brethren to use it to advertise functions that Lodges are holding and to place any items of interest on the site. Items to be added to the website should be sent to news@northwalesmark.co.uk.

Members of the Royal Ark Mariner Degree are to have a small green triangle inserted against their names in the list of Officers on the Mark Summons of the Lodge of which they are a member. This will be an ongoing process for the Secretaries of Mark Lodges to complete over the next few months, the Provincial Secretary has an example which he will send out to all Lodge secretary’s in due course.

Progress is being made on the new Welsh Mark Lodge with the next meeting to take place on 9th September at Bangor Masonic Hall at 7.00pm. Reminder emails have been sent out to those brethren who have already shown an interest. The Provincial Secretary will shortly be sending out a reminder to all Lodge Secretaries.

R.W.Bro. John Hoult had been Advanced into Mark Masonry and W. Bro. David C Thomas would be Advanced at the next Meeting of Maen Clo. W.Bro. Nick Woodward, Provincial Secretary of the Craft here in North Wales would be proposed as a joining member of Maen Clo. This was tremendous news for the Mark and for the Craft, further cementing our relationship.

St Seiriol Mark Lodge will celebrate its Centenary on 17th September with the meeting taking place at Bangor Masonic Hall. The Deputy Grand Master, R.W.Bro. John Prizeman will be in attendance. This is a significant event for this Province and will be the first Centenary of a Lodge for some considerable time. Those wishing to attend should please get in touch with the Lodge Secretary with some urgency as space is limited.

The PGM was pleased to inform the Brethren that Ty Gobaith/Hope House has received a Grant of £7880 for the purchase of a ‘Tech Trunk’ which contains various technical games, iPads and virtuality gear for the use of the children to give them a better quality of life. The handover on 25th September at Ty Gobaith in Conwy and the PGM will be in attendance.

The PGM will also be in Oswestry on 11th September attending a donation of £7395 towards Ethos Charity. This charity provides accommodation and rehabilitation for those who have suffered spinal cord injuries whether they are on discharge from the Robert Jones & Agnes Hunt Orthopaedic Hospital or residing in the wider community.

The PGM thanked all for the support that you have given the Mark Benevolent Fund over the years. Our own Charity night will take place on 21st September at Lyons Mound Cabaret Rooms. It will be a sit down meal on this occasion and the PGM  hoped that as many as possible would come along – please contact Paul Sefton for tickets.

We have also had the Sponsored Walk which took place at Llangollen on May 19th and will, it is hoped, eventually raise somewhere in the region of £4000 which we will donate to four local charities.

Many thanks also to Martin Wynne Jones for arranging a Strawberry Fayre which took place on 3rd August at Bangor and raised £250 for the Benevolent Fund.

All these events keep Mark Masonry in the eyeline, we must continue in this vein.

There would be a BBQ held at Cemaes Bay on 25th August, W. Bro. Roger Littlewood has all the details.

The Carol Service this year will be held at Elwy Hall on 17th December – please come along and support the event.

The Provincial Grand Master requested that everyone should continue to press for the very best Ritual that we can deliver to our candidates. He had always believed that it is better for Ritual to be ‘farmed out’ rather that have our Candidates subjected to inferior ritual, but this must not be an excuse for Brethren not to attempt any ritual whatsoever.

Finally, on an administrative note the PGM requested all Grand Officers to liaise with the Secretaries of their Lodges and ensure that the Summons’ issued should be correct in every detail before they are sent out.